Whew, what a week! Between birthday parties and back-to-school buzz, I'm beat! I laid pretty low this week, and will probably do the same next week, though there is some awesome stuff on the schedule. Check it out below.

Sunday, 8/23 - Cale Parks, of Aloha and White Williams fame, brings his electro-pop show to the B-side Lounge. Check out our review of his most recent album here and a q&a interview we conducted with him here.

Monday, 8/24 - Atlanta-based indie psych-rockers Gringo Star play the Beachland Tavern. As a special bonus, one of the local bands I'm most excited about - The Modern Electric - are opening. Promises to be a blast! 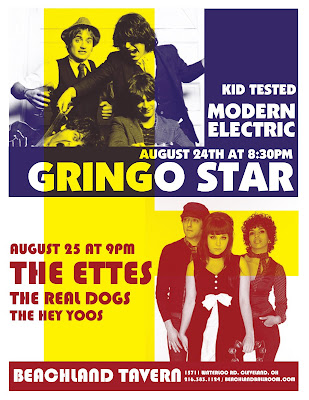 Wednesday, 8/26 - A great indie rock show for all you hipsters out there. Toronto's The Rural Alberta Advantage roll through town, hitting the Beachland Tavern with princely openers The Unsparing Sea. This is a particularly wise pairing and a great show to hit if you are feeling like you didn't get to enough this summer. 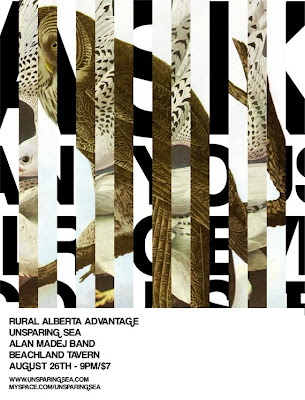 Thursday, 8/27 - For the film enthusiasts out there, this Thursday offers a treat, courtesy of the CIA Cinematheque. Check out Pontypool, Bruce McDonald's zombie flick for smart people. One critic has referred to this film as "28 Days Later written by Noam Chomsky." If that doesn't get your little cinephile hearts beating twice as fast as usual, I don't know what will. Perhaps this trailer:

For those of you not into cinema, linguistics, or zombies, you can check out installment #2 of the "Walk All Over Waterloo" Thursday night spectacular. Organized to draw attention to the revitalized Waterloo Arts District, each of the joints on that street will have special events going on and deals at the door. Plus, rumor has it, there just might be a mad game of wiffle ball breaking out ... 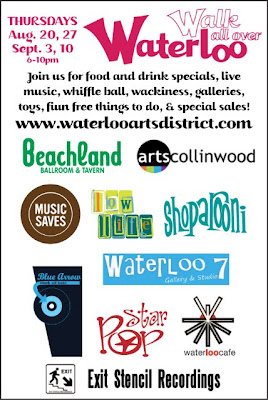 Friday, 8/28 - This is the night of the week for me, with two events I've been looking forward to all summer long. First, check out one of my favorite Cleveland artists, Mallorie Freeman, as she opens her solo show at William Rupnik Gallery. 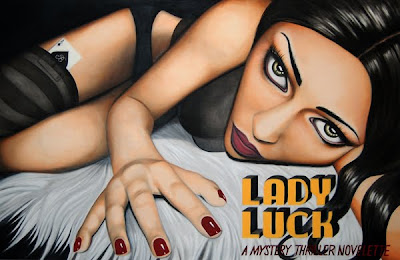 Then, head on over to Waterloo Road for Cracker's performance. That's right, Cracker. The fellas who pretty much provided the non-grunge soundtrack to the 90s are rolling through Cleveland this week, as they tour to support their newest release (#13), Sunrise in the Land of Milk and Honey. As an album, Sunrise is pretty good, especially the lead single "Turn On Tune In Drop Out With Me", which is accompanied by some additional great tracks ("Show Me How This Thing Works" and "Friends"), some very good ones ("I Could Be Wrong I Could Be Right" and "Hey Brett - You Know What Time It Is"), and nothing that could be considered mere album filler. With Sunrise, the band continues its streak of very solid and underacknowledged albums, a streak this decade that includes 06's Greenland, 02's Forever, and 03's awesome country cover album Countrysides. Record-wise, these albums might not be the level of Kerosene Hat (one of the single best albums of the 1990s), but they are solid and David Lowery still has a knack with writing clever, listenable songs that perfectly utilize Johnny Hickman's killer skills on the axe.

Better yet, these guys absolutely bring it live. I mean, how couldn't they, with the incomparable number of audience sing-a-long friendly tunes they have stuffed in their catalog, including "Low," "Teen Angst," "Get Off This," "Sweet Potato," "Been Around the World," "Seven Days," "Lonesome Johnny Blues," "Euro-Trash Girls," "Sweet Thistle Pie," "I Need Better Friends," "Mr. Wrong," "Guarded By Monkeys," and, of course, my three personal favorite Cracker live tunes, "Merry Christmas Emily," "Big Dipper," and their cover of Hank Williams Jr.'s "Family Tradition." Shoot, throw their more famous covers in to the mix and this band could play for five hours and still not hit all the songs you were hoping to hear (especially Jerry Jeff Walker's "Up Against the Wall, Redneck Mothers," The Carpenters' "Rainy Days and Mondays," Bruce Springsteen's "Sinaloa Cowboys," and Willie Nelson's "Reasons to Quit")!

Saturday, 8/29 - DEVOtional once again captures the crowd at the Beachland. Don't miss the all day DEVO convention, complete with bands, vendors, movies & a special appearance by DEVO member Bob Casale. 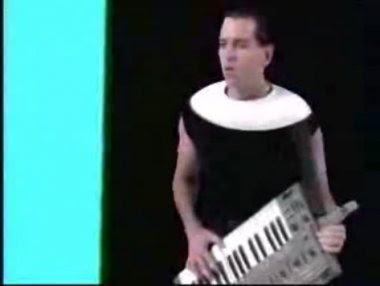 Other stuff to keep your eye on the following week: