Album of the Week: The Modern Electric

When I first moved to Cleveland, one of the things I consciously did was spend a lot of time getting to know the local indie scene. For those of you who don't live here (or too cynical to enjoy what we have here), you should know this: Cleveland has a rich and pretty grand scene. Sure, we aren't Portland or Athens or Brooklyn, but we do have some pretty solid talent and creativity twisting around the county.

I thought I had a pretty good handle on who was good in this town and why. I learned recently that my mastery of the scene was woefully incomplete. Here's how ...

As some of you know, I recently started writing weekly (sometimes more) reviews for Citizen Dick. This has been a total blast and one of the smartest decisions I've made in a while (though, surprisingly, there are very few entries in the smart ideas CB has had in 2009 derby). The guys there are all cool and while all of us love indie rock, we do so in such specifically different ways that each of the dudes always has a good tip for me.

Kevin, one of the founding honchos, mentioned that I should take a listen to The Modern Electric once, and then another time, as I was pulling a late night writing session for work and we were trading emails, he suggested it again. This time I pulled it up in my itunes on my computer, and fell immediately in love. Three listens of the album later, and countless repeat and replays of "David Bowie (Save Us All)" I decided to call up the band's myspace page and see where they were from and when they'd be coming through Cleveland on a summer tour.

You should've seen my face - pure, unadulterated, toddler joy - when I realized they were from Cleveland. I probably did a triple-take, making sure my eyes were working.

I mean, how could a band that good be from Clevo without me having heard of them. I told this to Kevin the next day, and he laughed and said something like, "Dude, you saw them live. They opened for Cotton Jones the night of the Citizen Dick-sponsored in-store!"

That further adds to the amazingness of this story. I saw a band live, they lived in my city, all this went down under my nose and literally right in front of my face, and it wasn't until I took a random listen, thinking they were from somewhere, anywhere, else. 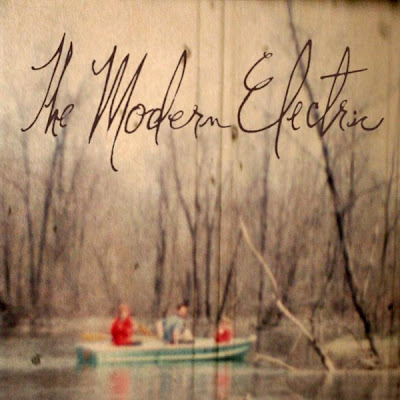 I told you the whole "how I discovered a band that actually came from my town" story so you'd know this isn't just mere Cleveland boosterism, but rather a band I'd write about if they were from Chicago, Atlanta, New Orleans, or (gasp) Los Angeles. Clearly, I'm drawn to the album for what it is, not because of where it came from.

So what is it?

Well, this is the kind of band that could easily be Top 40, if the execs at Clear Channel didn't have such bad taste and mortgaged souls. The Modern Electric brings to bear a 21st Century hipster Neil Diamond meets Billy Joel vibe with a sense of irony that is complementary rather than all-consuming. Frequently, though not exclusively, piano-centered, I love the piano work, melodic and sway-worthy. Simply stated, Garrett Komyati has some serious chops and a bright future. It wouldn't take a lot to convince me that this album was actually the soundtrack to a musical or hip new indie comedy. (Actually, the band's work is featured on a recent regional film production.) The Modern Electric is a band unafraid to write pop songs, songs where there isn't a lot of fancy stuff going on, yet the members of the band can all play their instruments.

So, you have a band that plays good, fun, smart music that is straightforward and accessible, rather than detached or cooler-than-thou. In our era, such earnestness might make them a novelty, but whatever. I dig novelty. It's fucking novel. And that's a good thing.

The album begins on a good note on "Where I Belong," with gentle electric guitar strumming for several bars before a single finger piano melody comes in. Eventually the full band comes in, with the vocals singing "Won't you take me with you if you gotta leave." The rest of the song features the singer/narrator trying to sell this plan, much like a more melodic Obama and the public option, though the singer shows far more emotion toward the end, as he repeats that opening phrase with desperation and duress, than our president ever does.

After the opener, the band goes immediately to awesome - these dudes don't believe in saving the best track for 3 or anything else. "David Bowie" is the catchiest, smartest, meta-pop song I've heard in forever. It'll easily be one of my favorite songs of this whole year. It is so good, you'd think Suckers wrote it. This is such a great tune, with completely fantastic lyrical and vocal references - it's as if David Bowie himself devised a sonic auto-hagiography. Listen to this once, and you'll spend much of the next week singing "Da-da-da-David, David Bowie."

Such moments of memorable lyrics don't stop there. On "Mistakes," Komyati croons "what am I doing wrong girl" in an unforgettable way, while on "Ghost," a stellar track that merges 70s minor-chord pop with heat and fuzz (think a little bit of Spoon, a little bit of Jack White), you'll lose your mind when you hear him sing with exasperation and shock, "what kills me the most, you're not even a ghost."

The Modern Electric brings the full complement to the table, er, stage, though, and just as I could list a bunch of digable lyrical references, the instrumentals are tight, too. I'm not sure what instrument is being used (keyboard or keytar with theremin effects, perhaps?), but the sound on "As Sharp As Knives" is ethereal and earthy and artificial in a nice way. And how in the hell do you make a sound that earns those three adjectives all at once?

Conceptualization is maybe the band's greatest strength, though. These guys all appear to be pretty young, which surprised me after listening to the two-track musical couplet, "Vanity Suite." (Part A is dubbed "One By One, the Lights Burn Out" while Part B is sub-titled "Divine, Starving, and Sleepless.") Part A is a beautiful instrumental interlude playing underneath dialogue between jilted lovers from a 1953 film (starring and directed by Ida Lupino) called The Bigamist that is so compelling it went straight to the top of my netflix queue once I learned the film's name. (The most compelling marriage between the band's soundtracking and the dialogue is when the spurned woman puts her foot down: "just leave me alone" and "get out," and the man (indeed, the bigamist), after protesting, does as he is told. Part B is a more traditional ballad, still retaining chord and theme similarities from Part A, especially during the ending reprise. The pairing and the scoring and the thought behind this comes from a more mature place than you'd expect from fellas as young as these are, but there you have it.

Actually, "Vanity Suite" could really be a three-part musical essay, given how easily the conceptualization segues into "Love and Misery." The solo guitar noodling is great in this song, but the best part is how I can close my life (yes, sometimes when driving) and try to imagine who the narrator was referring to in the previous song when singing about someone never being replaced. This album is most likely not a concept album, though I'd like it to be.

One of the biggest draws of this band for me is the piano. I mentioned this before, but since I'm such a sucker for piano-driven indie pop and rock, I'll hammer the point home. Although some songs begin as if inspired by Ben Folds ("The Anti-Sing Along"), Billy Joel is a more apt comparison. (And for all of you thinking that's uncool, you can go fuck yourselves right now. I'm not talking River of Dreams Billy Joel, I'm talking Piano Man, but either way Long Island's hometown hero torches your Grizzly Bears and Deerhunters every day of the week, every month of the year, every decade of the century.)

Other than "David Bowie," "The Anti-Sing Along" has to be this album's hit track. I don't give a shit about the title - this is a good song to sing along to, though that's likely the point. "Filming our Favorite Lies" has Billy Joel all over it (namely The Stranger era work, especially Movin' Out in the syncopation). Nonetheless, among the piano-driven tunes, "The Anti-Sing Along" and "Filming our Favorite Lies" are wonderful, but the beauty of "London Loves Paris, 1988" is unsurpassed on this album.

"London Loves Paris, 1988" closes out the album perfectly, with grace and inspiration and power (as well as discernible and delightful chord references to the Vanity Suite songs). It leaves me as happy about the fact that I can listen to the album all over again whenever I want to almost as much as I'm stoked about the fact that, as fellow Clevelanders, I can look forward to seeing these dudes play around town quite often from here on out. Maybe not whenever I want, but close enough. 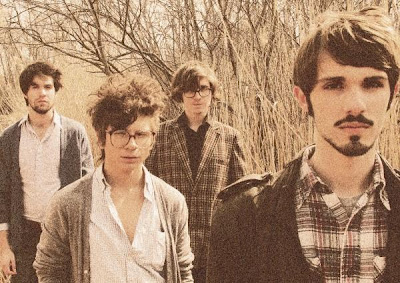 Make sure you catch The Modern Electric next time you get a chance. If your appetite has already been whipped into a frenzy, fear not: tomorrow they'll be playing in studio on WRUW (91.1). Check their website out here for more details.
Posted by CB at 9:51 PM

These guys are indeed fantastic, and I owe them an email actually. Sorry Modern Electric guys, I kind of suck at replying to email. Anyway. I had heard the name, but became fully aware of them on the night that we saw them open that Cotton Jones show. Really cool stuff!

I've been hearing these guys on 91.3 the Summit in Akron and finally today I decided to research them. Like you, I was so pleasantly surprised to learn they are from Cleveland. This truly pleases me. My research led me to your blog entry which I enjoyed immensely and I look forward to reading more.

I'm pimping The Modern Electric through all my social media outlets.

Are you familiar with The Woovs out of Barberton? Give them a listen if you haven't already. Another fantastic local band.

i think this album is fantastic too. i really like the modern electric. unlike the another band this is really impressive!!!

Aw, this was a really great post. In theory I'd like to write like this also - taking time and real effort to make a good article... but what can I say... I procrastinate alot and never seem to get something done. Replica Watches

The Modern Electric is Cleveland's best kept musical secret. One listen to this band, who writes all original material, and you will know their future is bright. Every song on their latest album is hit material and the singer is really, really amazing.